During Dick Naugles foodservice history, he battles internally with proper representation. He calls everything in the business by it’s correct name. It does not matter, if it is a grill spatula, promotional run or food item. Thus proper nomenclature is a priority.

But, Dick Naugles American Taco quickly becomes a staple of his fast food concept. While cohorts are quick to accept the Mexican title, he is not convinced.

These battles or internal struggles are more like quandaries. And we will leave the connotation battle of Dick Naugles American Taco to the end of this post.

So let’s start with Del Taco. The N effect highlights some examples and there are plenty.

Dick Naugle desires increasing sales on slower traffic nights (low volume sales). This night is Wednesday night. He knows if he can get families to come as a group, even giving away food or running specials, he will make money. This fact is due to a higher ticket average with the additional purchase of add-ons. Another reason is he knows it is the perfect time to train new recruits for the crew. As with most situations, Dick Naugle kills two birds with one stone.

Overtime, other executives change the name to “Taco Night.” Dick Naugle is mad and angry, all at the same time. Unfortunately, he is not selling Tacos, he is selling an event. Or even one better- a family night together. 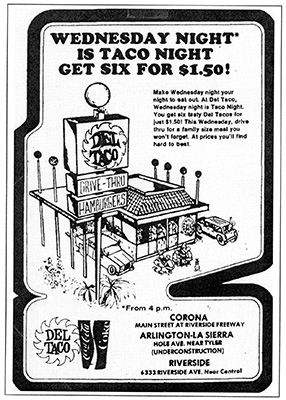 Dick Naugles American Taco is not a Mexican Taco as prepared South of the Border. He knows this, especially with his international travel. So this is another reason he does not like to advertise the taco so boldly.

For a short period of time, the executives relent. Dick Naugle continues family night promotions. Due to these arbitrary decisions, there is continual internal conflict. And this conflict leads to his eventual departure from Del Taco. Again, Dick Naugle’s pursuit for proper connotation works against him. It is an unspoken respect for the foodservice industry as a whole. Of course, the better word here is Integrity. Dick Naugles integrity is a combination of knowledge and experience.

Well, you are going to have to wait a bit longer for the Dick Naugles American Taco.

Now, let us move a decade into the future. Naugles is growing. Dick Naugle is not at the reins anymore. His twin kitchen is morphing into something new. Products are added to the menu without discussion. Portions cut. Prices rise. 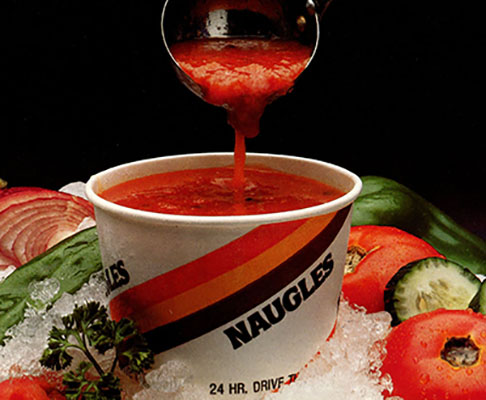 Déjà vu all over. A chilled vegetable soup from South of the Border. Who remembers Gazpacho?

Internally, we know who puts it on the menu and promotes. “Every customer will want to add it to every order,” hails management. Really! If you read the N Effect, Dick Naugle has a special term for this item.

Again, Dick Naugle is livid and embarrassed. For so long, He battles with keeping the true intent of the restaurant, and now this!

Now, you watch the video on the homepage and ask yourself this one question- does Dick Naugle need to add anything else to the menu to get business? The question is rhetorical. And you know the answer by now.

In conclusion, Dick Naugle knows deep down, it is NOT authentic Mexican food. He reviews other competitors popping up in the area, recklessly using the term.

So Dick Naugle grows with his twin kitchen concept. Dick Naugle initially decides to not use Mexican. He wants to be accurate, as well as he thinks he can promote it to his advantage. So the Hamburgers/Fries serve as the American Kitchen. The tacos and burritos are Spanish.

Therefore he believes his recipes are closer to dishes sold in Spain than in Mexico. Want proof?

Well, here is the proof- 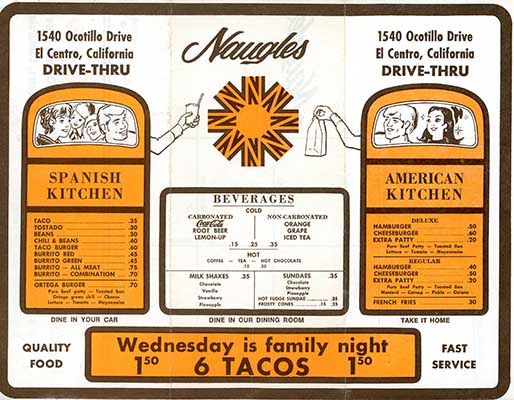 In addition, did you read closely? Most relevant for the observant reader is two words- family night. Another Dick Naugle moment carries over to Naugles with Dick Naugle at the helm.

Due to his loyalty to the foodservice business, stress is self-evident. As a result Dick Naugle suffers from heavy reflux. His internal strife creates much stress and heart ache throughout the years.

But to ease his severe stomach issues, there is a remedy. 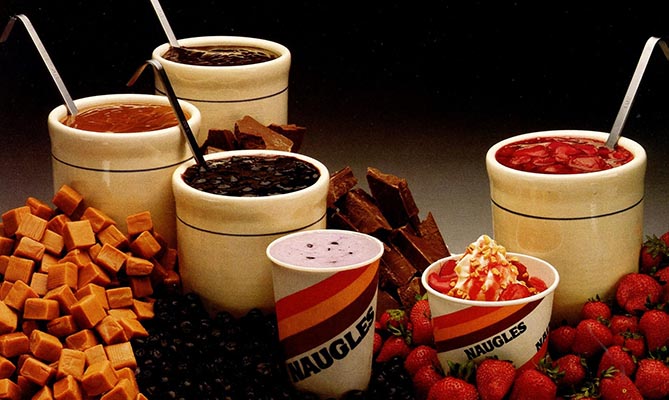 Dick Naugle loves ice cream. The ice cream helps to put out the fire in the belly.

Finally, Bill Naugles favorite addition is the dessert station. Bill Naugle teases Dick Naugle over the years. Seems like he truly had the triple kitchen concept.